On SudokuCraze, play as many sudoku games as you’d like, and play across a variety of difficulty levels for the right challenge.

Sudoku is a puzzle often confused as a math problem rather than a game, which could be why many people are so intimidated by it. However, sudoku is in fact a challenging game of logic, and a fun one at that.

Although the name is Japanese, the puzzle concept initially came from an 18th-century Swiss mathematician. The game was then known as “Latin Squares.” Later on, in 1979, a puzzle inventor from the U.S published a game called "Number Place," a number puzzle that contained the principles and objectives of the modern sudoku that we all know and love.

It then appeared in Japan in 1984, although it would not have become a global sensation without a puzzle manufacturer named Maki Kaji, the Godfather of Sudoku. He renamed the puzzle "sudoku," which is derived from the Japanese phrase "suji wa dokushin ni kagiru" or "the number must remain single."

Since then, sudoku has been a massive hit for puzzle enthusiasts and casual solvers everywhere.

The first thing to know about sudoku is that it's a puzzle with surprisingly few rules to remember. To begin, you need to keep in mind the following:

A classic sudoku puzzle consists of a 9x9 grid containing nine 3x3 boxes The objective of the puzzle is to fill the grid so that each row, column, and box contain the numbers 1 - 9. Players begin with a partially completed grid that has a single unique solution. 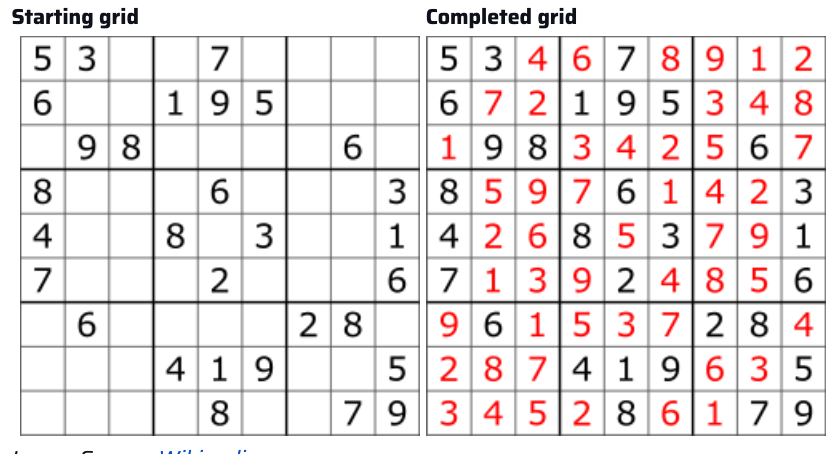 Rule 2: Guessing is not allowed

There are around six sextillion solvable sudoku puzzles with unique solutions, which means you will never run out of sudoku puzzles to play, and also that you can never solve this game by luck alone.

Sudoku is not a guessing game. Therefore, randomly placing numbers in an attempt to solve the puzzle is not an ideal strategy and should be avoided. To identify the missing numbers in each empty cell, sudoku players need to use logic and reasoning. There are no calculations involved. Scan the grid and use logic to make sure that the numbers won't repeat.

One thing to note is that the puzzle will become easier the more numbers you enter, and the final numbers can usually be entered very quickly.

To beat sudoku, you'll need to use the process of elimination. Find out which number fits in which cell by reducing the number of candidates until there is only one possibility left.

Since beginner puzzles usually provide many numbers in the starting grid, you have a head start before solving the puzzle.

One way to know if you've beaten the game is by simple math. Remember that if you add all the numbers from one to nine, you get 45. So the sum of every row, column, and box should be 45.

Like any other game, there are different techniques you can try to help you with the puzzle. These are some of those techniques:

This is one of the first moves you should make while solving the puzzle. In this technique, you will focus on one 3x3 box at a time and find a number that is missing from that box. Then scan the rest of the grid for instances of that number, and draw imaginary lines back to the box. In some cases, there will only be one possible place that your number can go. In the example below, the number 9 has been excluded from all but one cell in the central box.

Penciling-in is a helpful beginner's technique that involves writing all possible numbers in each vacant cell to make cross-hatching easier. You can check and remove the numbers that don't fit, and once you have ruled out all but one of the numbers, this number can be entered into the grid.

Once you have a row or column with only two or three blank cells remaining, finding the candidate for the missing numbers will be easy since there are very few options. For instance, if you have a nearly completed row, check the columns and boxes connected to the row and see if there are any cells in which only one number fits.

A hidden single is a number with only one possible position in an entire row, column, or box. To find this, you need to write all possible numbers that could go in a cell and check every row, column, and box connected to it to identify the hidden single. Cross-hatching and the counting technique can help you to find hidden singles, as shown in the grid above.

A naked pair is a set of two lone numbers in exactly two squares in any row, column, or box.

While you're figuring out the placement of numbers in other cells, you can reserve two cells for each number in the pair and remove them as possible options. In the grid below, the green square has to be 1, 2, or 8 since all the other numbers are included in the column. However, the naked pair of 1 and 2 in the top-left box rules out 1 and 2, so the green square must be an 8. 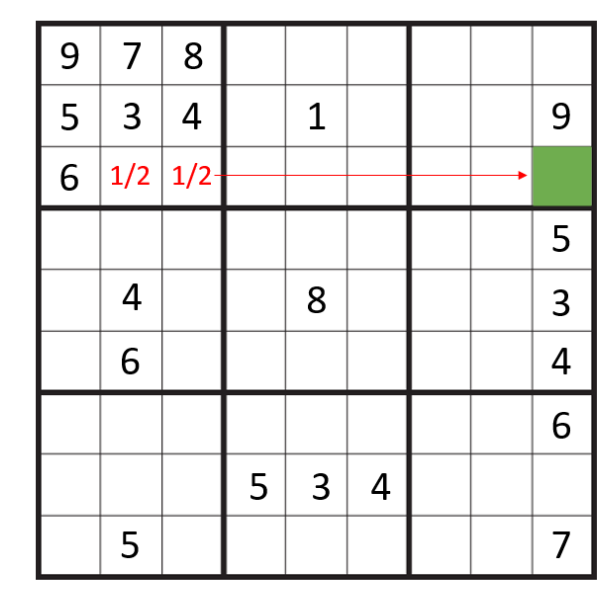 Now that you know the basics and some techniques to try, here are some tips that can help you make the game more enjoyable:

Play as a Beginner

While you are learning the basics of sudoku, focus on solving easier puzzles until you get the hang of it. If you can solve easy sudoku within minutes, you can gradually level up to hard sudoku to keep challenging yourself. Try playing a puzzle as a part of your daily routine to help you advance to more difficult levels.

Start with the Easy Sections

While playing the puzzle, you'll notice that some boxes, columns, or rows contain more numbers than others. Start with these and complete them using the process of elimination using the techniques described above.

Sometimes you will make mistakes, especially while playing as a beginner. Always play the game with a pencil and eraser so you can make changes easily. Looking at a messy page with lots of pen scribbles and crossings out can be stressful, which may make the puzzle harder to solve.

Sudoku can take a long time to solve, especially if you're a beginner, so don't worry if a puzzle is taking you a while. Keep in mind that there's no time limit to finishing a sudoku. The more you try to solve the game faster, the more stressed out you'll be. Sudoku is supposed to be a challenging and beneficial brain exercise, but it should be fun too. Take your time until you get used to various techniques and difficulty levels.

Do you need to be good at math to play?

Sudoku doesn't involve any calculations or formulas, even if it uses numbers throughout the game. This is a puzzle game that relies on logic and reasoning to solve.

How long does it take to play?

How long you play will depend on your skill level and the difficulty of the puzzle you're solving. Others can finish in a few minutes, while others can take days. Remember that there's no time limit in this game.

What are the benefits of playing sudoku?

Sudoku is a brain exercise known to improve concentration, memory, and logical thinking. Since there's no time pressure in playing, sudoku can be a relaxing hobby that keeps your mind engaged while you're taking a break.